Showing posts from December, 2015
Show all

431: The Absence of Direction = Distractions 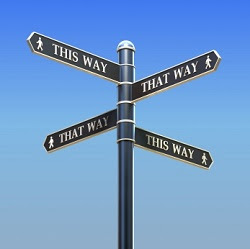 Recently I've been looking at the point of direction. I have no clear cut, obvious, in your face 'point' as far as what I can direct myself towards. Never any 'gifts' or interests specifically, nothing I'm drawn to, or that I find motivation to get involved with. I never really had 'a point' in life, and in a way, I've allowed that to be an excuse for myself to not give myself direction. Because without a specific point that clearly waves the flag of 'come hither... come to me, learn this, do this, embrace and be involved in this' I've rather allowed myself to be consumed by distractions. Whether that be work, movies, tv series, life dramas like gossip and things that don't really matter or nurture any real potential of the life within. In the absence of direction, I've given myself distractions.

So it's been an excuse... for a very long time I can see the theme song playing in my head, "I have no point, I have no point…
Post a Comment
Read more

430: At what cost Do you Feel Better about Yourself?

Listening to the latest reptilian recording on Eqafe, "Where are you?" the question was asked, 'where am I?' The response I had was in the context of myself, like inside myself, my body, my mind. In the interview, it was mentioned that if the response was in the context of where you are physically, like your environment, it's a pretty cool reference for yourself in terms of your awareness being focused in the physical reality.

That was not my response, so there was a slight reaction to that. Though briefly before that, there was hope and anticipation that they would mention something about how I responded and that it would be "better than the first response."

So this is a point I've noticed some up a few times in the past week.

I've started two new jobs, and I noticed there were comparisons I was making between myself and those training me - both seeing myself as better at the job than my trainers, as well as management noticing this too - me wa…
Post a Comment
Read more
More posts